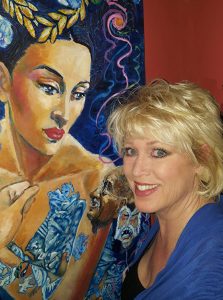 Emily T Andress graduated from William Woods University in 1979 with a Bachelor Degree in Fine Art with concentrations in printmaking and painting. Early on in her career, Emily chose the path of printmaking and developed a style recognizable as her own. Utilizing plenty of negative space, vivid color, and black line, the work proved to be popular in the US and abroad providing a good living for 25 years. Feeling uninspired by a style that had changed very little since the mid-80s, Emily took a hiatus from printmaking and worked towards finding her style in oil painting. Drawn to the innovations in art that happened in turn of the century Paris, Emily traveled there to become inspired by the voices from another time. In particular, the uniqueness of Modigliani and the color use of the fauvists and German expressionists proved to be the inspiration to find that new identifying style. Recently she has been working with master painters to bring deeper meaning to her work. By including her line work from her printmaking days into her paintings, Emily’s style is, once again, instantly recognizable as her own. Emily’s work has been shown nationally and internationally in group and solo shows. She looks forward to another month long residency in Ireland and also one in Paris in 2017.
Recent Achievements:
Notable Corporate Collectors:

Brendan Campbell is a Belfast-born painter who lives and works in County Carlow. He studied Fine Art Printmaking at Manchester Art College, England, later moving to the Irish Republic to study Arts Administration at post-graduate level at University College, Dublin.
He worked for a time as an arts administrator before moving into art education full time. His work has been exhibited in solo and group shows in both Ireland and Britain and also in large public exhibitions such as the Royal Hibernian Academy Annual Exhibition in Dublin. His paintings are also in many private collections in Ireland, Britain, the United States and Japan.
Much of Brendan’s work celebrates contemporary urban life and frequently reflects his considerable interest in art history. It is influenced by Impressionist, Orientalist and other pre-modern styles as well as drawing inspiration from the Scottish Colourists and neo-Fauves such as Raoul Dufy and Andre Derain. Though originally abstract in style, his work now veers much more heavily toward the traditions of classical realist painting. As well as his favoured themes of buildings and street life, the subjects of still life and human figure also figure prominently
Outside of his painting work, Brendan has also illustrated book covers for Wild Honey Press and has engaged in large-scale public mural projects. 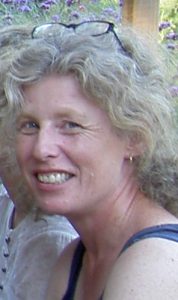 Kate Campbell is from Belfast. She studied in London and Paris, where she took her Masters in Textual and Visual Studies and worked with La maison de la Poesie in Nantes. Self-taught in art, Kate has long experience in workshop facilitation for both printmaking and painting. Her paintings and prints, inspired by her studies in text and image, often take a wry and humorous approach and frequently include references to animals and childhood. Her workshops firmly encourage the use of students’ own daily life and personal interests as key subject matter for artwork.
Kate’s linocut prints, like her paintings, commonly incorporate collage elements and the written word, extending their meaning and enabling multiple possibilities for interpretation. Kate also works in poetry, and this strongly links to her other workshop subject – art journalling – which combines many of the key elements of text and image in a different way. Kate has been represented by  Dalkey Arts and the Doorway Gallery, Dublin. 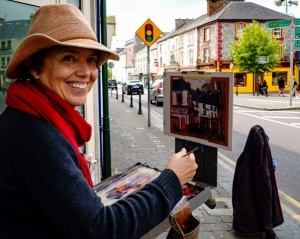 Jean grew up in Naples, Italy, New Orleans and the Carolinas.  She completed her education with an MFA  (Painting and Drawing) at James Madison University in Virginia. Her art career has led her to Moscow, Russia as a set designer and she regularly returns to Italy (sometimes with students). Jean returned to Ireland in 2017 for a second residency at Olive Stack Gallery and to teach a workshop.
When not working plein-air, she creates large-scale paintings in her studio near Charlotte, NC.

This year her work was featured in many venues: 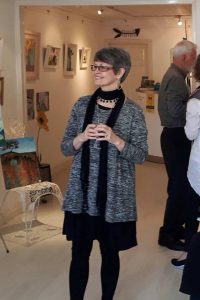 The desire to express herself artistically has been unrelenting in Lillie Morris’ life. A native of Augusta, GA, her serious pursuit of art began in the early ‘70’s at Augusta College and she has continued her art education through books, workshops, networking with fellow artists and travel. Lillie devotes herself full-time to her creative endeavors and conducts workshops of her own.

Lillie enjoys working in mixed media collage, acrylic and more recently cold wax and encaustic. Her collage paintings contain elements as diverse as lines from poems, fragments of nature, newspaper, sheet music, prepared papers and all manner of ephemera, arranged into conceptually layered compositions. Her love of texture can easily be noted in her paintings, which often feature highly manipulated surfaces.

Being a native Georgian, Lillie is inspired by the landscape, waterways and history of the Piedmont region. She also has an intense interest in Ireland, a country she has visited annually since 2000. Lillie has enjoyed four art residencies in Co. Kerry Ireland two at Cill Rialaig Artists Retreat, located in the southwest of Ireland in Co. Kerry (2006 and 2009) and two as artist-in-residence at Olive Stack Gallery in Listowel, Co. Kerry (2016 & 2017)

In addition to visual art, Lillie is passionate about Irish traditional music and Irish literature. She enjoys playing the fiddle and has studied with some of today’s finest traditional Irish fiddlers. Ireland, it’s literature and its’ music are continual sources of inspiration and their influence is often reflected in her artwork.

Lillie and her husband Bill currently reside near Augusta, GA on a farm located in rural Columbia County. 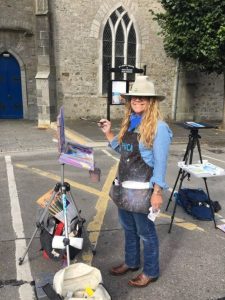 Diane Pike was born in Iowa, and moved to Boulder, Colorado at an early age. Boulder was home for 50 years until the Lake Norman area of North Carolina became her residence in late 2008. Diane graduated from the University of Northern Colorado in 1975 with a focus on graphic design and printmaking. She took her first painting class in 2002, learning the Henry Hensche tradition –The Art of Color Seeing–studying the effect that light has on color. It is this approach that fuels Diane’s paintings and infuses them with saturated color and abstract shapes.

Diane paints full-time and teaches painting classes at Ciel Gallery in Charlotte. Diane also teaches several workshops a year—Texas, New Mexico, Alaska, North Carolina and Ireland have been recent workshop locations. She is a Signature Member of Plein Air Artists Colorado, a Signature Member of the Pastel Society of Colorado and a member of the Piedmont Pastel Society in North Carolina.

Mireille SWINNEN is Belgian by nationality but has lived overseas all her adult life.  She currently is back to her studio in Belgium where she has offered mosaic workshops since 2006.  Besides teaching trips to the US West Coast and East Coast, every year, Mireille organizes international workshops for her students in Venice, Spilimbergo, Rome or France (Paray-le-Monial) bringing much-needed foreign exposure and new techniques to her most dedicated students.  Her “River of Smalti” workshops in the US are hugely popular

Over the past few years, Mireille has specialized in animal and human portraits in the preferred medium of her choice, smalti.  Her work has been selected for various shows and exhibits, SAMA Chicago, SAMA Seattle, the yearly exhibit in Paray-le-Monial and multiple private exhibitions.  On the basis her mosaic work, Mireille was appointed as the 2014 Artist in Residence at the Museum of Glass,.  She won Member’s Choice Award at the SAMA conference in Philadelphia.

Mireille is a proud and celebrated member of SAMA and CMA.

Check back soon…more to come!